An international research team led by Colin Turnbull from Imperial College London and Karin Ljung from UPSC showed that cytokinin, a substance that regulates plant growth, can be sensed on the outside of the plant cell. For a long time, researchers were convinced that cytokinin is mainly perceived within the cell, initiating reactions to adjust the cell’s development. These new findings, that were published last week in the journal Nature Communications, will fuel a 20-year-old discussion.

Cytokinins have many different functions in the plant. They control root and shoot growth, autumn senescence, they regulate cell division and much more. Within the plant cell, cytokinins bind to cytokinin receptors and these proteins then initiate a reaction that leads to, for example, enhanced shoot growth. This was the common view so far. In the current publication, the research team found a proportion of cytokinin receptors also sitting on the surface of the cell and they showed that they are fully functional there.

“The discussion about cytokinin receptor localization started almost 20 years ago when the first receptor was discovered. The recent view was that the receptors were mainly localised in the endoplasmic reticulum, which is a membrane system located within the cell,” explains Ioanna Antoniadi, who is postdoc in Karin Ljung’s group and first author of the article. “However, it was never excluded that the receptors might also sit in the plasma membrane, the membrane surrounding the cell.”

Initially, the researchers wanted to identify which of the different existing cytokinin forms is the active one that regulates root growth and development. They isolated individual cells from the root of thale cress, measured the cytokinin contents within and were really surprised to find similar amounts of active cytokinins inside and outside of the cell.

“We were wondering what these active cytokinins are doing out there and if they could actually be perceived,” says Ioanna Antoniadi, who started this work as part of her PhD thesis in London in 2013. “We started a collaboration with Karel Doležal and his team from the Palacký University in Olomouc, Czech Republic, who developed an incredible tool to answer our question.”

The Czech group synthesized active cytokinin molecules and attached them to sepharose beads that were bigger in size than a plant cell. These bound cytokinins could not enter the plant cell but were still able to activate a cytokinin response in the cell.

During their latest experiments, the researchers got in touch with yet another research team that was coming to the same conclusions as them but used a completely different approach. They were able to publish their results at the same time in the same journal fuelling the ongoing discussion even more. 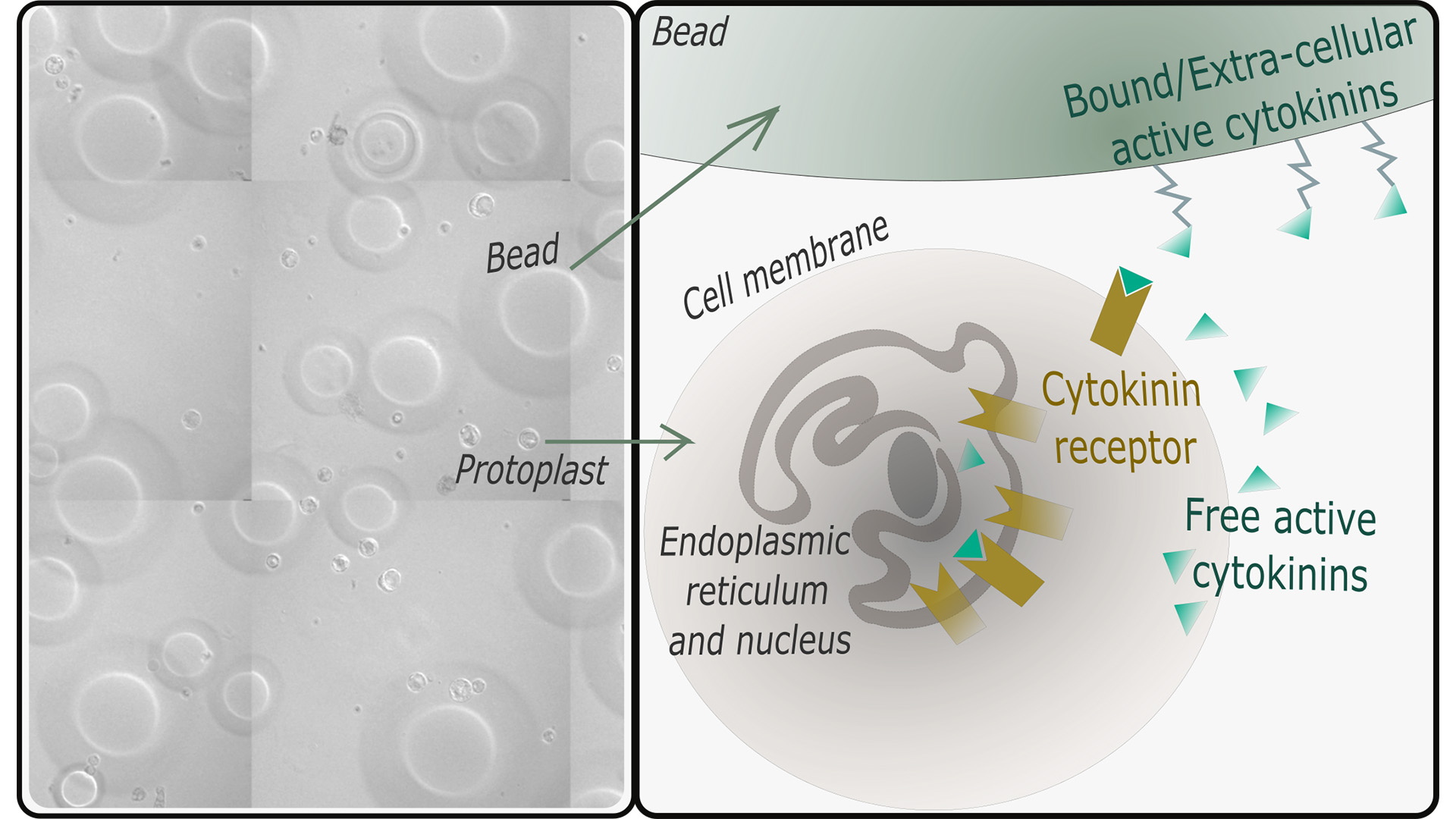 The corresponding article that was published at the same time:

Colin Turnbull
Department of Life Sciences
Imperial College london
Email: This email address is being protected from spambots. You need JavaScript enabled to view it.