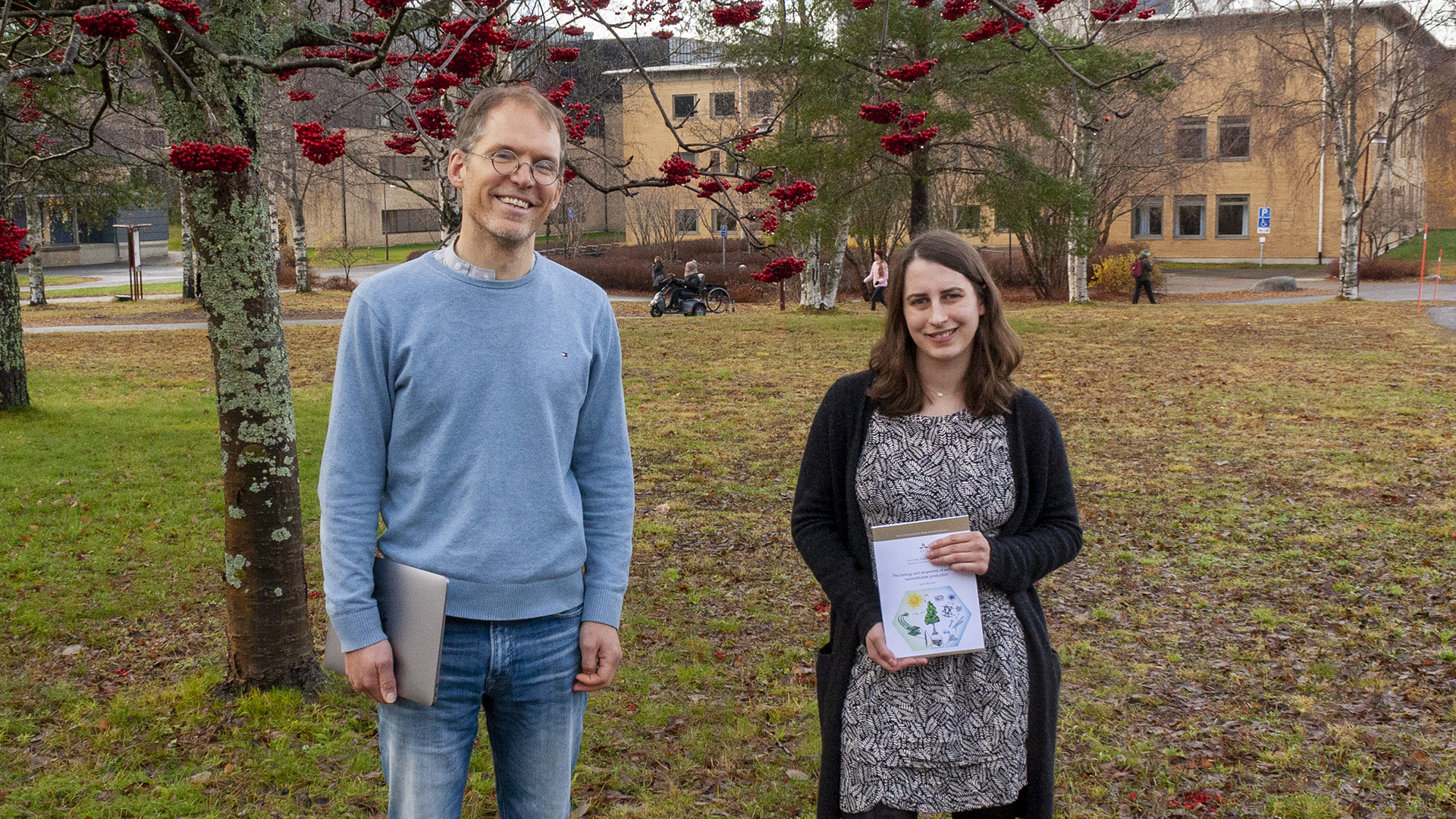 Anne Bünder (right) together with her supervisor Totte Niittylä (left) after the defence (Photo: Anne Honsel)


Nanocellulose forms the basis of many novel materials and is used already now for a wide range of different applications. Anne Bünder, PhD student in Totte Niittylä’s group, investigated how wood properties influence the extraction of nanocellulose from wood material. She showed that modification of cellulose and the amount of lignin influence the efficiency of the nanocellulose extraction. Anne Bünder has defended her PhD thesis at the Swedish University of Agricultural Sciences on Friday, 29th of October 2021.

Different raw material resources have been already tested for nanocellulose production but not much was known about how the chemical composition of the wood source affects the yield and final properties of nanocellulose. In close collaboration with material scientists from Luleå University of Technology, Anne Bünder examined in her PhD how modified chemical structures of wood influence the efficiency of nanocellulose production. She used material from genetically modified hybrid aspen trees in which the cellulose synthesis is impaired and from trees that have naturally different composition of the three main components of wood - cellulose, hemicellulose and lignin.

The modified trees were mechanically weaker

“We used hybrid aspen trees in which a protein that is involved in cellulose biosynthesis is genetically reduced. This protein makes sure that the cellulose fibres are aligned correctly in the primary cell wall, but it is not clear if it also plays a role for secondary cell walls,” explains Anne Bünder. “We saw that the wood of these modified trees is mechanically weaker, but we could not see any changes in wood anatomy. Also the cell wall structure in the secondary cell wall, which contributes most to the mechanical performance of wood, was not changed. So, we were wondering if this protein is really needed for a proper alignment of cellulose in the secondary cell walls.”

In wood, cell walls consist of different layers. The outer layer is the primary cell wall which is much thinner and more flexible than the more rigid secondary cell wall that consist of three layers. In each cell wall layer, cellulose macrofibrils are aligned together with hemicellulose, lignin and proteins in a specific pattern that provides mechanical strength and also flexibility. Long glucose chains are the building blocks of cellulose microfibrils which bundle together to cellulose macrofibrils.

In a next step, the researchers wanted to see if also other wood components affect the nanocellulose production. They used wood from field grown hybrid aspen trees that contained different amounts of lignin and they also used a naturally occurring phenomenon to induce changes in the wood composition. When trees that are bend down grow, they produce wood with more cellulose, longer cellulose chains and less hemicellulose and lignin on the outer side of the bending. The researchers used such wood material to produce nanofibrils and assumed that the higher amount of cellulose and a lower amount of lignin will make the isolation of nanofibrils easier. However, the opposite was the case.

“Cellulose is the component of interest for industry, and the common opinion is that a lot of lignin is making cellulose less accessible. Our results put lignin into a completely new light,” explains Anne Bünder. “Our hypothesis is that the cell wall becomes more porous when lignin is removed which is one of the first steps in nanocellulose production. The more lignin in the cell wall, the more porous the cell wall gets when it is removed making cellulose better accessible in further treatments.”

The researchers think that these results open up new opportunities for tree breeding programs. So far, the focus was set on reducing lignin or changing its structure in the wood to make cellulose better accessible for extraction, but this was often on expense of tree health and viability. The new findings illustrate that lignin might not be such a big problem for nanocellulose extraction as thought so far. They also show that a better understanding of the composition of wood can help to improve the isolation and also the performance of nanocellulose extracted from this material. 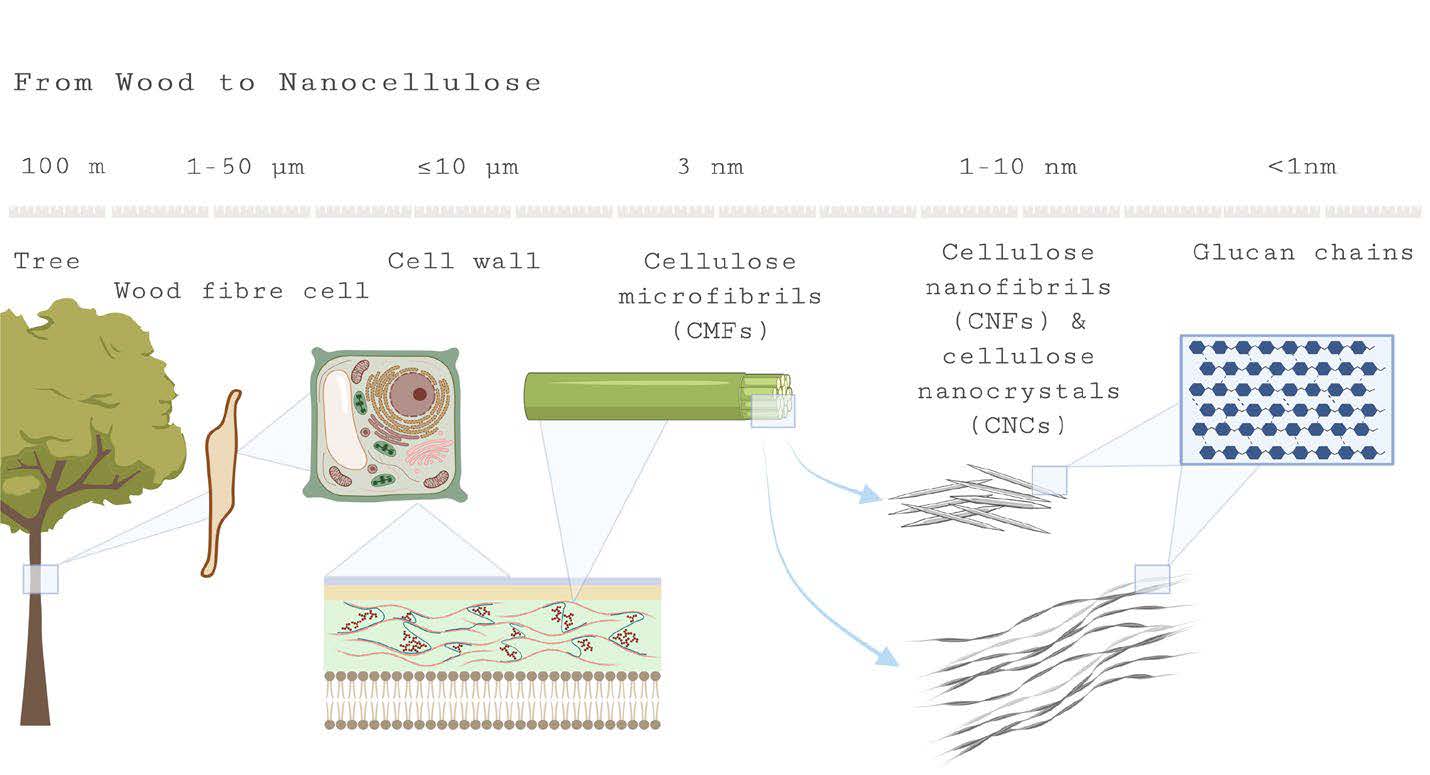 From wood to nanocellulose: a scale guide (figure created by Anne Bünder with BioRender.com)

What is nanocellulose?
Nanocellulose is the collective term for cellulose nanocrystals and cellulose nanofibrils. It can be extracted from different cellulose sources including wood, crops, algae but also cellulose synthesizing bacteria. Its mechanical and thermal properties and its low weight make it very attractive for material scientists, and the number of applications is constantly increasing. Nanocellulose is already now used for example in packaging, absorbents, food additives and hygiene products but also for biomedical and electronic devices, filter systems and different forms of composites.

Title of the thesis: The biology and properties of wood for nanocellulose production