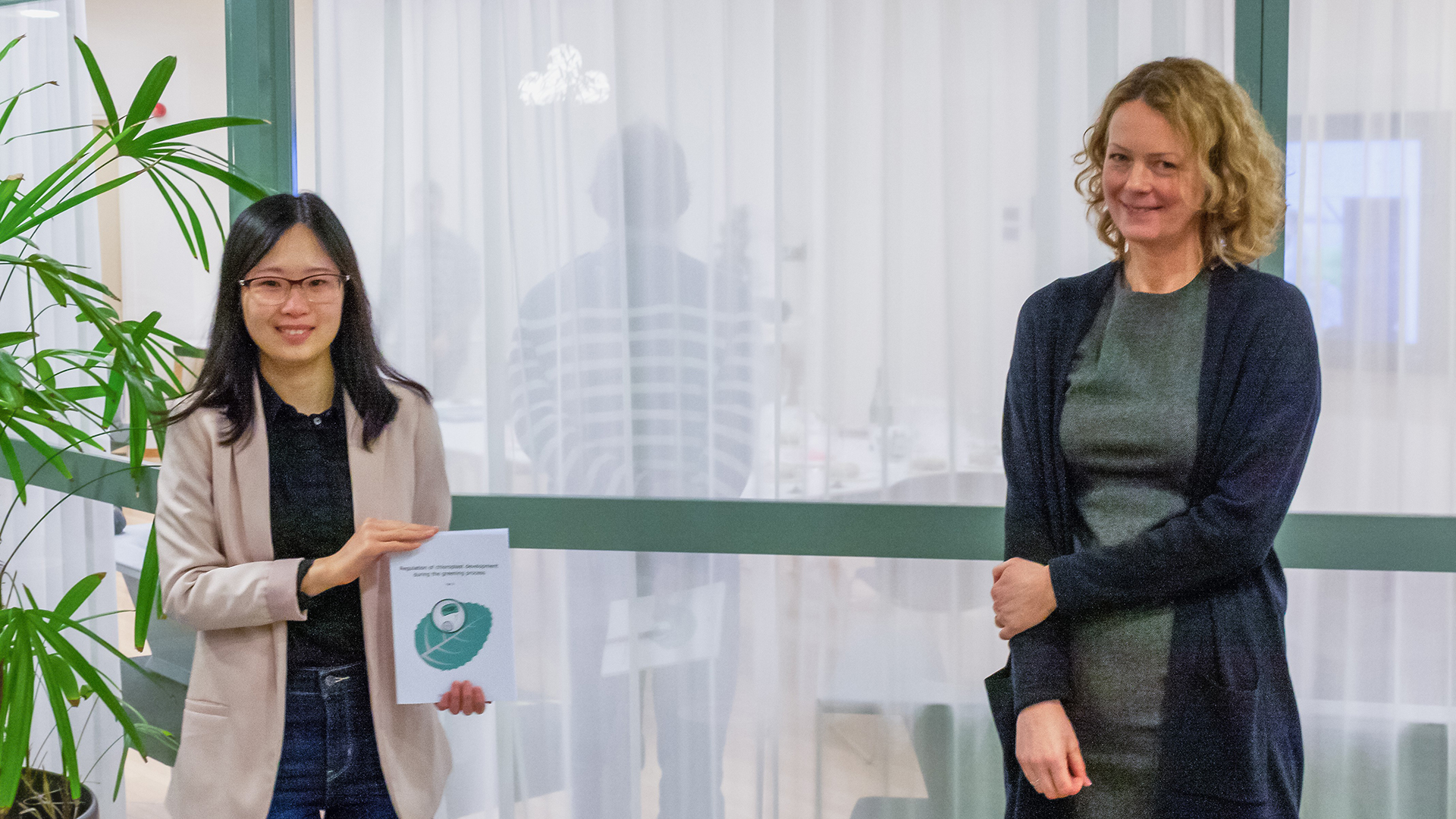 What are the first developmental steps when a cell turns green? This question was addressed by Yan Ji, PhD student in Åsa Strand’s group, who studied the development of chloroplasts, the sites in the cell where photosynthesis takes place. Chloroplast development is a very complex process involving a series of regulatory steps and Yan Ji could show that certain regulatory steps happen already earlier than previously assumed. She successfully defended her PhD thesis at Umeå University on Tuesday, 15th of December.

The greening process starts as soon as the cell receives light for example when a germinated seedling reaches the soil surface. The chloroplast originates from a cyanobacterium that was taken up by a eukaryotic cell. During evolution, some of the genetic information from the cyanobacterium has been transferred to the gene material of the host cell that is stored in the nucleus. Chloroplast development therefore requires a coordinated communication between the chloroplast and the nucleus. Yan Ji studied the early stages of chloroplast development in the plant Arabidopsis thaliana.

You studied chloroplast development during the greening process. What aroused your interest in this topic?

To understand photosynthesis is of course very important for plant research but I did not had very much background about the whole process of chloroplast development when I was applying for this position. However, when I started to work on this project and got to know more about it, I got more and more intrigued. And when I was then for the first time inducing the greening process in our cell culture system, I thought this is really cool.

What is the advantage of using a cell culture system to study chloroplast development?

Our project was focussing on early stages of chloroplast development. The cell culture system allowed us to better resolve these early stages temporally. When dark grown seedlings receive light, it takes about 12 to 24 hours until the chloroplasts are green and fully mature. In our cell culture system, it takes five days until the cells start to turn green after they receive light and the cells develop more synchronised. resembles the chloroplast development in true leaves, which are the leaves that develop after the seedling has reached the soil surface. The cell culture system is of course more artificial because the cells are isolated from their tissue context which plays also an important role for development. That is why we always complemented our cell culture experiments with experiments with seedlings to verify our results.

What was the most fascinating for you during your PhD? Have you experienced any unexpected surprises during your studies?

I focussed in my studies on the role of the plastid-encoded plastid RNA polymerase, called PEP. This is a multi-subunit protein complex in the chloroplast that is responsible for the activation of most of the genes needed for photosynthesis. It was thought that the fully assembled complex associated with additional proteins is only available in the light when the chloroplast is developing and becoming mature, while in the dark, PEP was thought to be mainly present in its core form consisting of just four core subunits. We wanted to study when the different subunits are recruited to the protein complex during chloroplast development and focussed on the time when the cells just started to become green. However, we realized that the fully assembled complex was already available both in our dark grown cells and in the dark grown seedlings. We could also indirectly show that the complex was already active at this stage. The difference to the more mature chloroplast was that the abundance of complexes available was much lower. There were some hints in this direction before from experiments with other plants, but we did not expect to find the fully assembled complex so early during chloroplast development in true leaves.

What was the biggest challenge you faced during your PhD?

The discovery that the full assembled PEP complex is already available much earlier than we thought was of course very fascinating but also quite challenging for me because I had to rethink and redesign my hypotheses and experiments as a whole. Some of the planned follow-up experiments did not make sense or were not feasible anymore. That was very challenging. I also faced some technical challenges when I wanted to isolate chloroplasts from the cell culture. This is a standard method for plants, but the established protocol did not work for cells from the cell culture because their cell walls seem to be stronger. We had big problems to break the cell walls which is needed to isolate the chloroplasts. We tried many different ways to get it done and this took very long time which was quite frustrating.

What are your plans for the future?

I definitely want to do a postdoc either back in China or somewhere here. During my PhD, I learned many lessons and I am really looking forward to starting a new project and applying my experiences from this time. Hopefully, I find a nice project in photobiology or photosynthesis research to be able to continue in this field. I would be very interested to study these topics in other species to see which processes and components are conserved among species.

The public defence took place on Tuesday, 15th of December at Umeå University. Faculty opponent was Eevi Rintamäki, Department of Biochemistry at the University of Turku in Finland. Yan Ji's supervisor was Åsa Strand. The dissertation was live broadcasted via Zoom.

Title of the thesis: Regulation of chloroplast development during the greening process