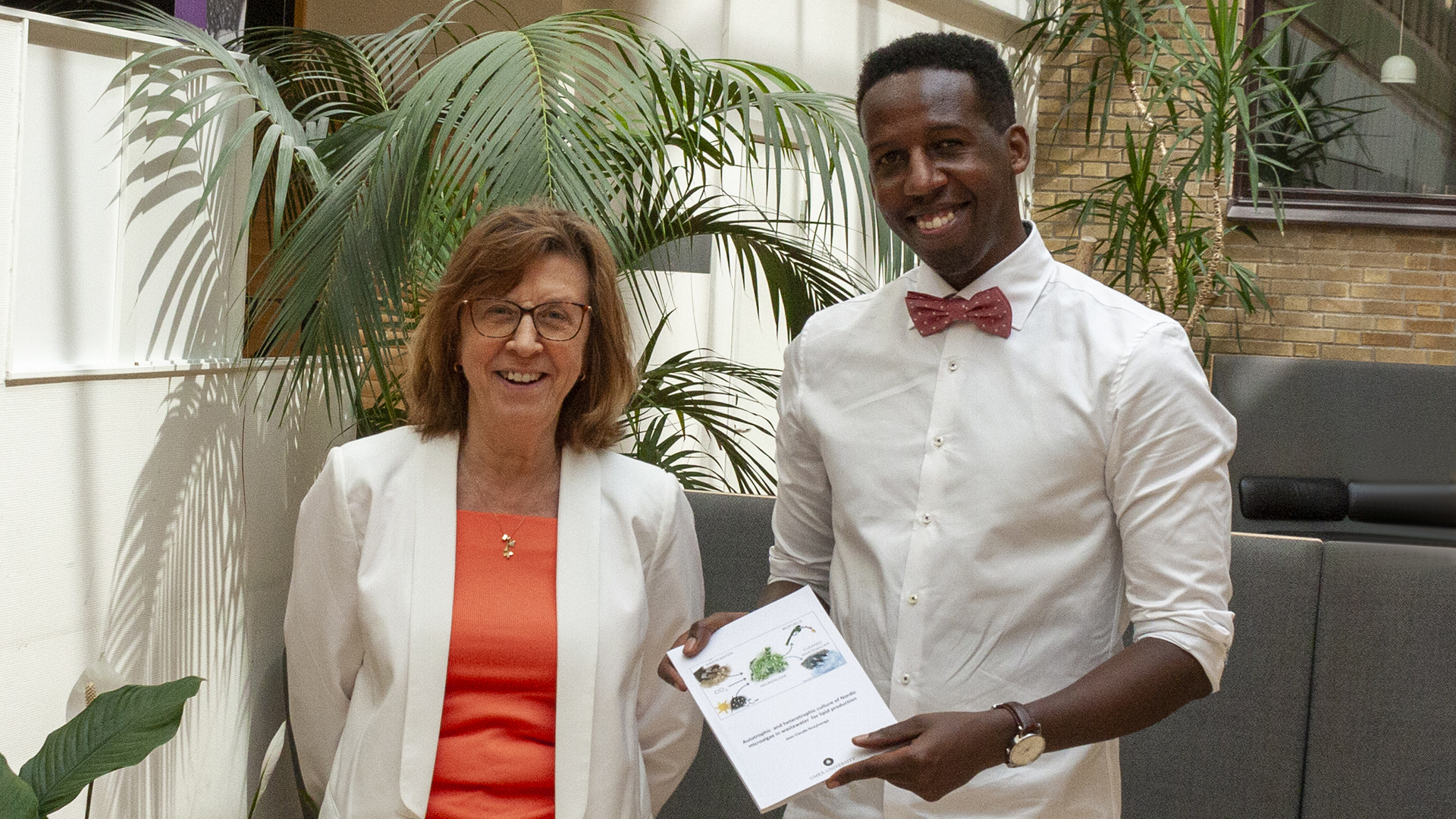 Microalgae have a high potential for biodiesel production and in parallel benefit domestic sewage treatment. Jean Claude Nzayisenga, PhD student in Anita Sellstedt’s group at the Department of Plant Physiology, validated a method to rapidly analyse the lipid, carbohydrate and protein content of microalgae. He also tested different growth conditions that improve quality of algal biodiesel and in parallel treat sewage. He successfully defended his PhD thesis at Umeå University on Monday, 15th of June.

Microalgae are photosynthetic, fast growing single cell organisms that live mostly in water and produce high amounts of proteins, fatty acids and carbohydrates. To measure the amount of these compounds produced during the growth of microalgae, Jean Claude Nzayisenga and his colleagues coupled the optical method Fourier-transform infrared spectroscopy (FTIR) with the complex mathematical modelling method Multivariate Curve Resolution-Alternating Least Squares (MCR-ALS). They demonstrated that the combination of the two methods is useful to monitor changes in fatty acid, carbohydrates and protein contents.

“FTIR was already shown to allow measuring fatty acid and carbohydrate contents of microalgae but used alone, it relied on the assumption that the protein content remains constant during cultivation, which may not always be true”, says Jean Claude Nzayisenga. “We compared our results with the ones gained by using other standard techniques and showed that FTIR is a useful method for monitoring changes of the biochemical composition in microalgae. As FTIR is a relatively fast method, it could be even applied on a daily basis to monitor a microalgae cultivation system.”

Jean Claude Nzayisenga worked with microalgae species that were isolated in Northern Sweden and are adjusted to the long winters with low temperatures and only a few hours of light. Some of these microalgae are able to grow even without light as long as an alternative carbon-source is given. Jean Claude Nzayisenga and his colleagues grew microalgae either with light and carbon dioxide to allow doing them photosynthesis, with light and glucose or glycerol as carbon source so that they were still able to make photosynthesis but not completely rely on it, or they grew them without light but with glucose or glycerol, so that they were fully depended on the external carbon source.

“When we grew microalgae without light but with glycerol as carbon source, we could see that the microalgae are able to produce high amounts of fatty acids and that the composition of these fatty acids looks promising for biodiesel production”, explains Jean Claude Nzayisenga. “We chose glycerol because it is a cheaper carbon source than glucose and it is a by-product of biodiesel production offering a more sustainable and cost-effective production circuit. In future, it would be interesting to test also other carbon sources that are produced as industrial by-products or come from food waste.”

In most of his experiments, Jean Claude Nzayisenga used not just one microalgae strain but compared different strains and evaluated which strain has the best properties for biodiesel production under the respective growth conditions. He also analysed the capability of the microalgae strains to take up nutrients from municipal wastewater to see if they could benefit sewage treatment. All tested microalgae strains were able to take up most of the nitrogen and phosphor from the wastewater which are the main contaminants in municipal wastewater. This offers the possibility to use microalgae for the wastewater treatment and in parallel produce raw material for biodiesel production.

Title of the thesis: Autotrophic and heterotrophic culture of Nordic microalgae in wastewater for lipid production