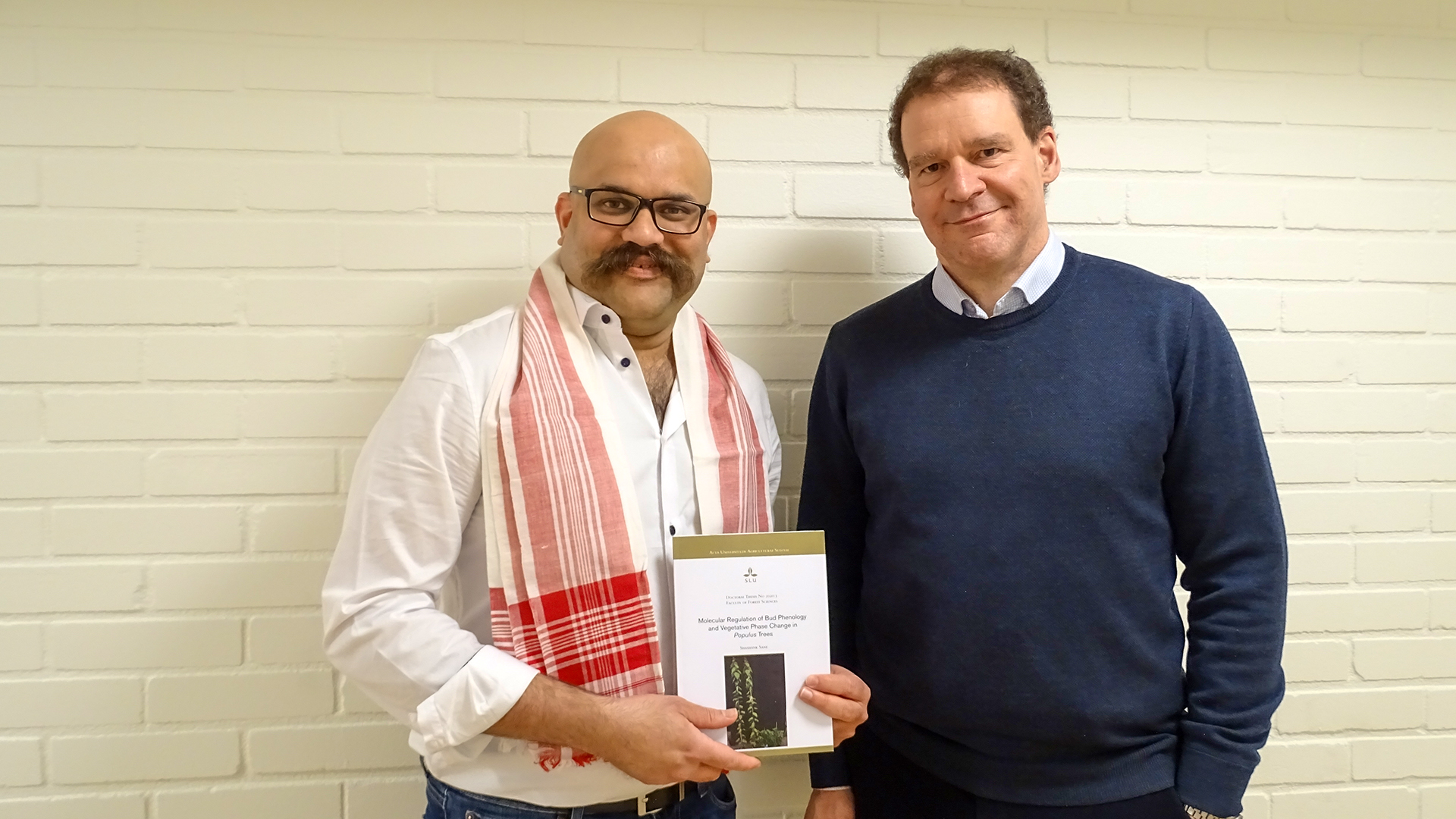 [2020-04-07] The genetic machinery controlling aging and seasonal growth in hybrid aspen is using at least partly the same molecular components. Shashank Sane, PhD student in Ove Nilsson’s group at UPSC, modified some of these components and characterised their function during those developmental processes. By comparing his results from hybrid aspen with findings in the annual plant thale cress, he demonstrated that the genetic components are similar but the way how the components work together differs. He successfully defended his PhD thesis today in P-O Bäckströms sal at SLU in Umeå.

Shashank Sane has focussed in his PhD thesis on two aspects of vegetative growth in hybrid aspen: the transition from a young to an adult stage and the adaptation to seasonal growth. The underlying regulation networks are very complex but uses similar components that are also involved in the regulation of flowering in thale cress. By genetically modifying three of these components in hybrid aspen, Shashank Sane demonstrated that they can interact in different ways with the other regulatory components of this network than was previously described for thale cress.

In his experiments, Shashank Sane used modified hybrid aspen that were overexpressing microRNA miR156 and others in which microRNA miR172 was inactivated. MicroRNAs are small molecular regulators of gene expression that are found in all plants and animals. MiR156 is in thale cress active in seeds and young plants and inhibits genes that induce flowering. In contrast, miR172 becomes activated with increasing age and blocks genes that repress flowering. The two microRNAs counteract each other in its action and their regulation is closely adjusted to each other.

“We expected that these two gene modifications have similar effects on the growth of the trees as miR156 is once overactive and in the other trees, its antagonist miR172 is blocked,” says Shashank Sane. “But it was really astonishing for us to see that some of the genes that are regulated by those two microRNAs were regulated in the opposite way in hybrid aspen than in thale cress. Our suggestion is that the function of these genes has evolved differently in hybrid aspen than in thale cress, probably to adjust to the perennial growth.”

The researchers made a similar observation when studying the hybrid aspen genes that correspond to the thale cress gene GIGANTEA. In thale cress, this gene is part of a regulation network that senses the day length and regulates flowering. Shashank Sane and his colleagues focussed on the role of the poplar GIGANTEA genes for growth cessation and bud formation. Also here, they demonstrated that the network components interact in different ways to regulate the growth stop and bud set in hybrid aspen than they do during induction of flowering in thale cress.


About the public defence:

The public defence took place on Tuesday, 7th of April at SLU Umeå. The faculty opponent was Professor Miguel Blazquez from the Institute for Plant Molecular and Cellular Biology, Valencia, Spain who participated in the defence remotely. Shashank Sane's supervisor was Prof. Ove Nilsson. The defence was live broadcasted.

Title of the thesis: Molecular Regulation of Bud Phenology and Vegetative Phase Change in Populus Trees