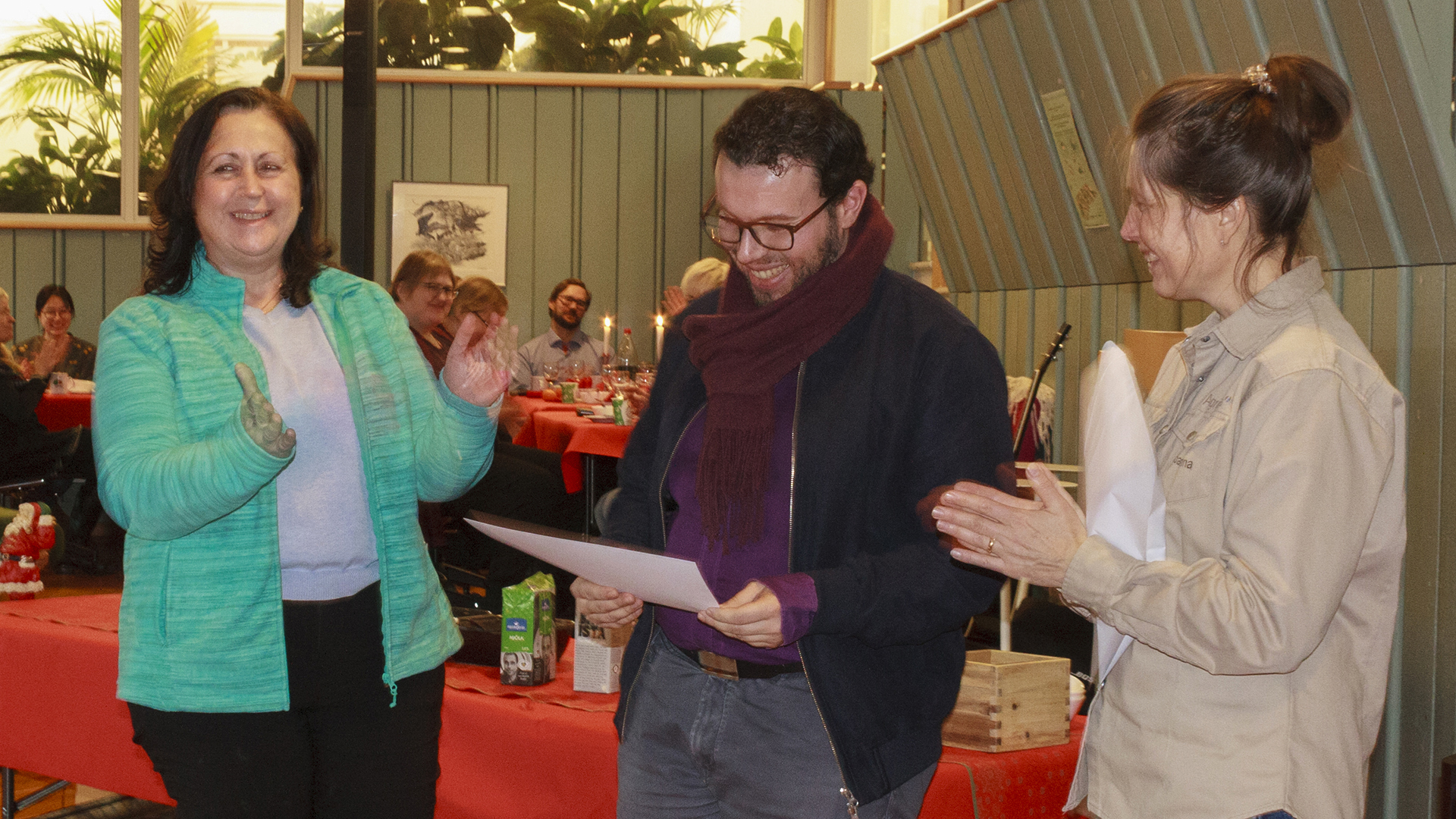 The Agrisera prize 2018 was presented to Sacha Escamez (middle) by Joanna Porankiewicz-Asplund (right) from Agrisera and by the chair of the UPSC board, Catherine Bellini (left). Photo: Anne Honsel
[2018-12-12] Sacha Escamez receives this year’s UPSC Agrisera Prize. The award was announced today during the traditional UPSC Christmas lunch. Sacha Escamez is awarded for his scientific achievements and engagement in scientific discussions at UPSC and for his valuable contribution in upgrading the UPSC microscopy platform. The prize values that Sacha Escamez’s diverse commitments helped to improve UPSC’s work and social environment.

Sacha Escamez successfully carried out research on the regulation of lignification and cell death during xylem development first as a PhD student and now as postdoc in Hannele Tuominen’s group. He actively participates in and encourages scientific discussions at UPSC and also promoted his research in a public science talk for the Swedish television last year.

This year, he invested a lot of time in upgrading the UPSC microscopy platform by collecting the requirements and wishes from his colleagues, testing out different systems and negotiating with the companies. He is taking on a key role in setting up single molecule detection methods that can be done with the new instrumentation at the UPSC microscopy platform, and he will help to introduce users to those new methods.

The UPSC Agrisera Prize is awarded every year to a PhD student, Postdoc or technician at UPSC for excellent scientific achievement and positive contributions to improve the UPSC working environment. Four nominations were sent in by Sacha Escamez’s colleagues for the UPSC Agrisera Prize this year. Sacha Escamez’s nomination stuck out because it emphasized not only his scientific achievement and encouragement for the microscopy platform but also his social engagement (e.g. by creating the UPSC innebandy team) to make UPSC a nice place to work at.


Link to the video of Sacha Escamez public science talk "How do plants make plumbing pipes from cells?"