When a seedling turns green: Scientists at UPSC have identified the link between light and chloroplast development 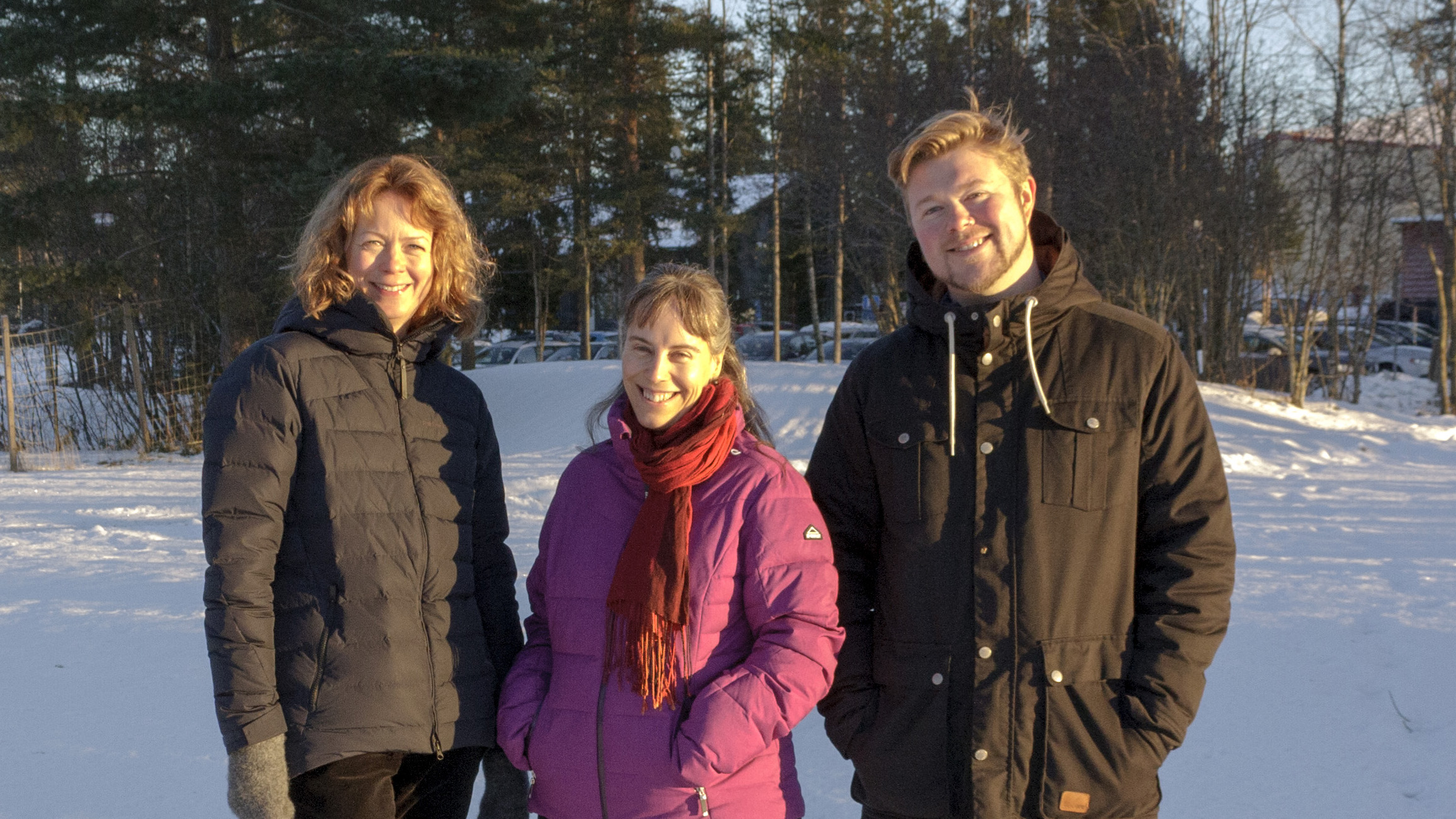 [2018-01-03] It has long been assumed that light activates chloroplastic gene expression via so-called thiol-mediated redox regulation. However, the mechanism giving rise to this regulation has remained elusive until now. Åsa Strand and her group at the Umeå Plant Science Centre have now identified the components involved in this redox regulatory mechanism. Their results are published in the journal Nature Communications.

It was demonstrated that certain proteins, called thioredoxins, transfer electrons, primarily derived from light, to the protein PRIN2 (PLASTID REDOX INSENSITIVE2). PRIN2 becomes reduced and changes its structure from a dimer (i.e. two PRIN2 proteins are bound together) to a monomer (single proteins). The PRIN2 monomers then activate photosynthetic gene expression in the chloroplast. This type of regulation is called thiol-mediated redox-regulation because the functional chemical group mediating the transfer of electrons is the sulphur containing thiol group.

“We identified PRIN2 several years ago. We knew that it was sensitive to redox changes and that it was required for normal gene expression in the chloroplast”, explains Åsa Strand. “We have now shown that PRIN2 is regulated by light via thioredoxins and that it then activates a protein complex called PEP. This protein complex is responsible for expression of the photosynthesis related genes in the chloroplast.”

The protein complex PEP (plastid-encoded RNA polymerase) reads the information stored in the DNA of the chloroplast genome and copies it into RNA (ribonucleic acid). RNA serves then as template to translate the information stored in the DNA into proteins. PEP is a large protein complex that needs several associated proteins to gain its full function. One of these associated proteins is PRIN2.

The proteins required for a fully functional photosynthetic machinery are partly encoded in the nucleus and partly in the chloroplast genome of a cell. Thus, some form of communication between the two cellular compartments is required to ensure that all components are available at the right time during seedling development. PRIN2 plays an essential role in the communication between the two compartments because the status of the PEP complex links the functional state of the chloroplast to the nucleus, enabling the plant to synchronize expression of photosynthetic genes from the nuclear and chloroplast genomes during seedling development. 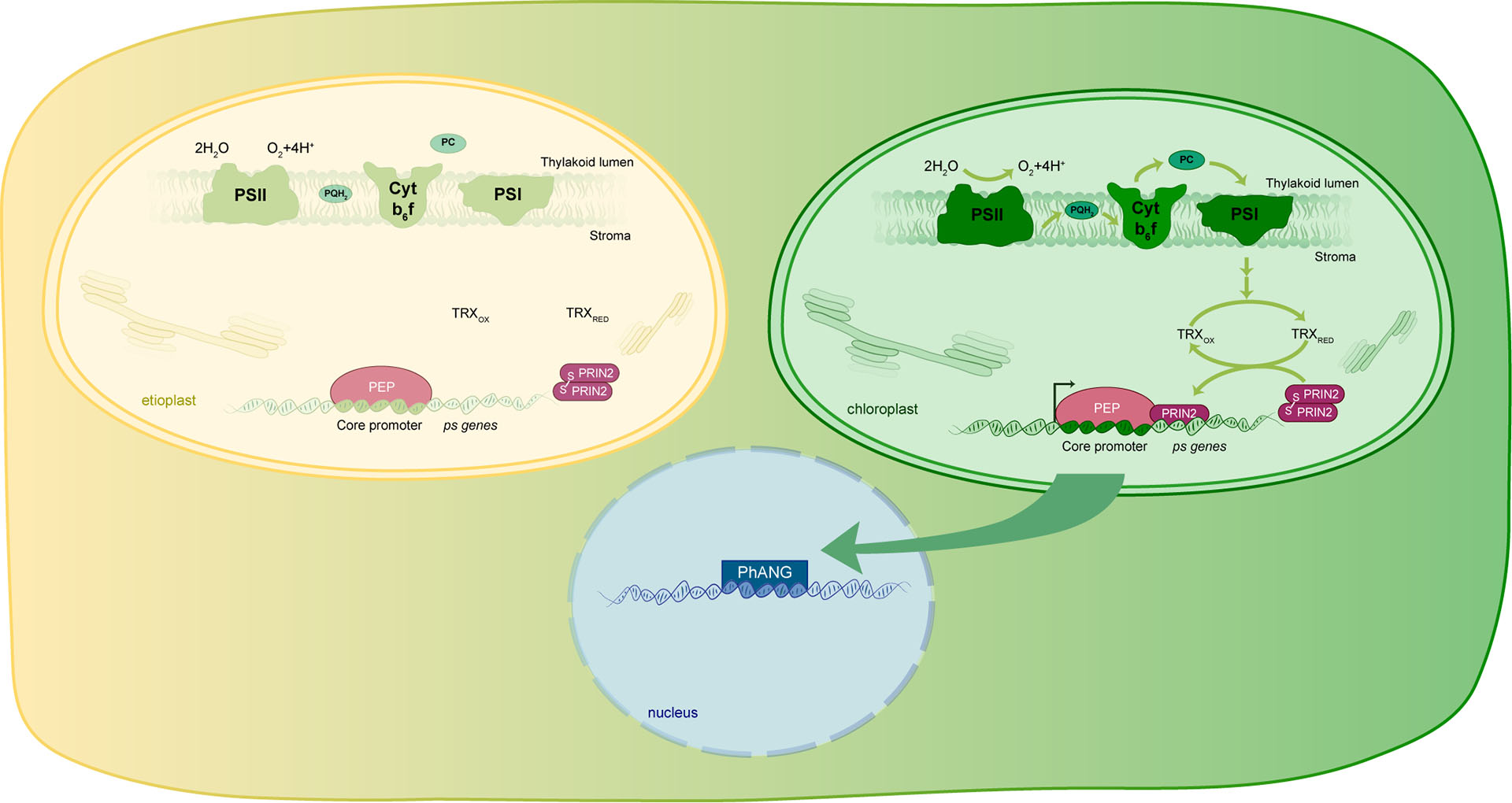 Schematic overview about the molecular mechanism linking light and chloroplast development (created by Daria Chrobok): When light is received for the first time by the cell, etioplasts (top left side) develop into chloroplasts (top right side). The photosystem II (PSII) starts to use the light energy to split water. The released electrons are transferred over the electron transport chain consisting of plastoquinone (PG), cytochrome b (Cyt b6f) and plastocyanine (PC) to the photosystem I (PSI). From PSI the electrons are transferred over several steps to thioredoxin which becomes reduced and then transfers the electrons further to PRIN2. PRIN2 can now activate PEP and PEP activates the expression of the photosynthesis related genes.
The article
Manuel Guinea Díaz, Tamara Hernández-Verdeja, Dmitry Kremnev, Tim Crawford, Carole Dubreuil & Åsa Strand. Redox regulation of PEP activity during seedling establishment in Arabidopsis thaliana. Nature Communications, (2018) 9:50, DOI:10.1038/s41467-017-02468-2
Link to the publication
For more information please contact:
Åsa Strand
Umeå Plant Science Centre
Department of Plant Physiology
Umeå University
Email: This email address is being protected from spambots. You need JavaScript enabled to view it.
Phone: +46907869314